Born out of a loathing for the corporate exploitation of Black Friday Sales and Christmas marketing, #Craftmas aims to get word out about the artists, artisans and craftspeople making beautiful gifts. Why buy a mass produced piece of plastic when you can gift an exclusive and interesting piece made by a creator-maker looking to make a living.

Support #Craftmas by using it to Tweet about your favourite makers, by using the hashtag as a Christmas shopping directory or simply by retweeting!

“I don’t want to be rich, or famous, just able to hold my own, and others if needed. I want to be a part of a community not in need of one – I want to help others through art – I see a future finally.”

For artist Vanessa Wigmore hopes to put her talents to work to build a better life for herself and to make something more for those around her – and she has found that her art, which she pursued for her own sense of creativity has become the means by which she can generate good will.

Having struggled with her health her confidence was low, but art became her refuge. She found it granted her a new optimism.

She explained: “I feel like there is hope, when all was lost I discovered other people liked my art and friends were requesting my pictures of elephants and other animals. Paid work was impossible for me as the Multiple Sclerosis fatigue and depression kicked in. I felt useless and I couldn’t see a way out of having to rely on the government for the rest of my life.”

But expressing herself through art has allowed Vanessa to come back to life and discover more about who she is, with a way of being both part of the world and to be independent.

“I’m a funny, tenacious, caring soul,” she added. “One who wants to leave a loving footprint on this earth through creation, kindness and love. When I’m mixing the colours I am in the moment, it’s healthy.”

When she began her journey Vanessa found herself inspired by the photographs British astronaut Tim Peake took of London from space and she started trying to recreate the stunning light effects over the capital in mixed media on canvas. Her piece ‘London At Night’ was built up from bits and pieces Vanessa had gathered, seeing her work hours with a glue gun, crystals and mica flakes to recreate the original photographs accurately. The piece now lives with a journalist in London. 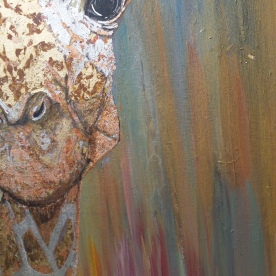 Vanessa said: “I was given a box of perspex off cuts by a friend who explained they had belonged to an artist/designer who his widow had kept, due to her pride that he had worked in London with top designers.

“I was trying to achieve modern abstract resin wall art and this was a turning point for me, it gave me the finish I wanted and the ability to wall mount it fairly flush.”

The piece led to Vanessa growing in confidence and started to see her works become popular with the buying public and she made sure that the kindness she had received was repaid.

She added: “About 8 months later I did a stall at the local fair and did amazingly well, this lady was a part of that. I knew she would be there so I gave her this piece, so she always had a part of remembering him.”

Now Vanessa hopes that she will be able to bring her creativity to the wider world and that her passion for art will sustain both it and her into the future. 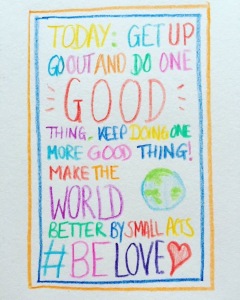